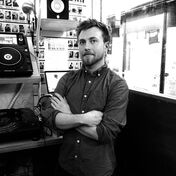 Deeper Cuts.
The very best in new jazz, beats and bass - monthly on Balamii
​
Started on Transmission Roundhouse back in 2015, the show has had leading names from the London Jazz scene and beyond guesting over the years including Shabaka Hutchings, Joe Armon-Jones, Cassie Kinoshi, Tamar Collocutor, Myele Manzanza, Allysha Joy, Matthew Halsall, GoGo Penguin, Mammal Hands, STUFF., Clap! Clap!, Aly Gillani, Pete On The Corner, Vik Sohonie, Chelsea Carmichael, PYJAEN and Makaya McCraven.
Recent highlights..
Deeper Cuts was live, joined by Clap! Clap! aka Cristiano Crisci. The Italian producer talks about his musical journey so far and gives an insight into how his new record came together. The LP, Liquid Portraits, is out on Black Acre.
Since 2016, Vik has released beautiful compilation records from Somalia, Sudan, Senegal, Cape Verde and Haiti - with an aim to reshape the international narrative on complex countries with vibrant musical heritage. Ostinato are releasing their first album of new material, which also happens to be the first international record out of Djibouti, in East Africa. Vik is Deep in Conversation to tell us about the label, and the amazing new set - The Dancing Devils of Djibouti.
Inspired by the spring sunshine Karl goes digging through the latin corners of his record collection in an all wax special. Latin-jazz, MPB and a slew of styles from Argentina, Puerto Rico via NYC, Cuba and Brazil (but mostly Brazil!). Classic cuts from Airto Moreira, Ray Barreto, Gato Barbieri and Sivuca. Lock in, stay in, but never stop dancing.
Karl is joined by musician, composer and woodwind specialist Tamar Osborn! Her band Collocutor have just released their third LP, Continuation, with On The Corner Records - and she’s Deep in Conversation: walking through the breadth of musical experiences which have shaped her sound, from afrobeat to North Indian classical, and the evolution of Collocutor. Plus some freshness from Vertaal and an ace new Gary Bartz & Maisha collaboration.